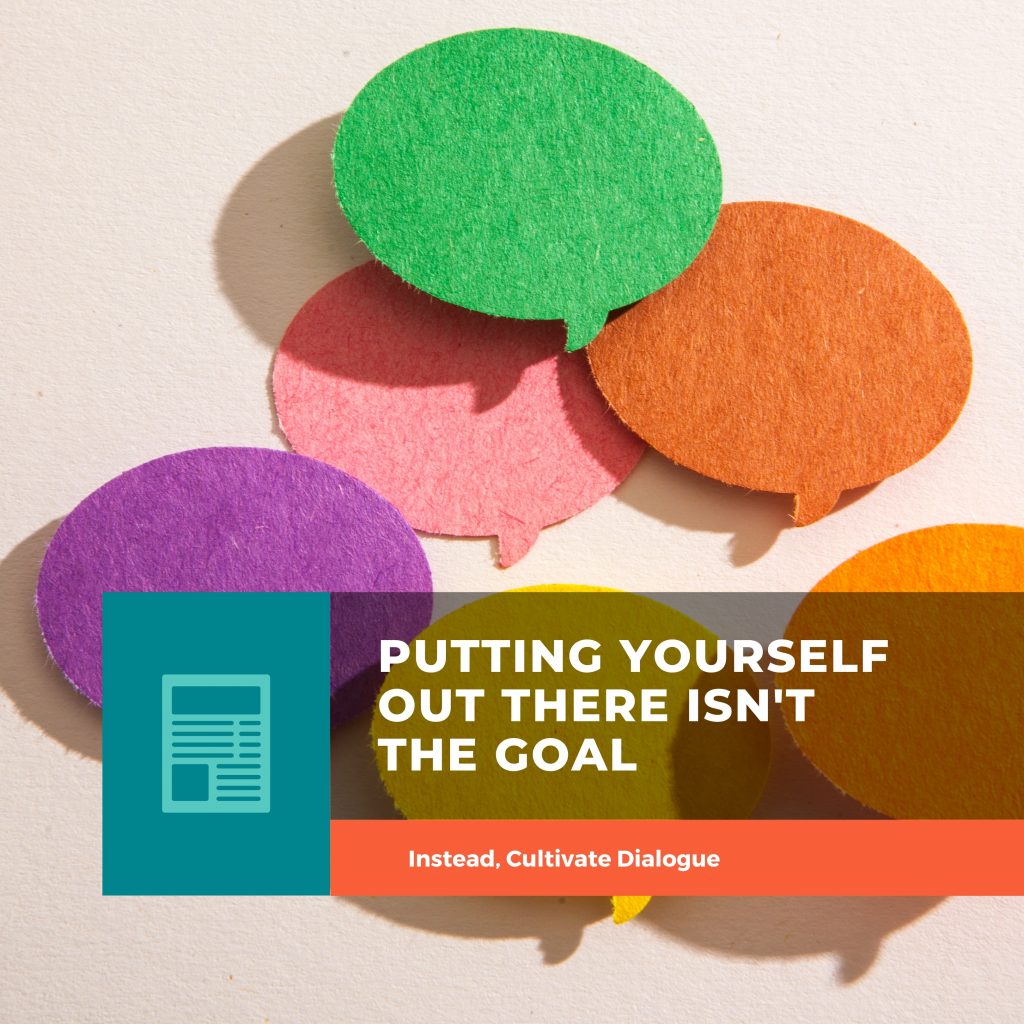 Imagine waking up without dreading another day in a job that no longer fits who you are. Imagine getting laid off, then discovering you’ve had the power to generate your own income all along. Imagine spending fewer hours on work that drains you, living in joy more of the time.

If you’ve started a business or are mulling the thought, I have a question for you. How many times have you heard, “You need to put yourself out there”? Whoever told you that probably meant well. If you’re lucky, it came from your cheerleader friend who knows what you’re capable of. And chances are, you’ve seen it on social media but can’t remember exactly where.

One of My Business Pet Peeves

Either way: You have just encountered one of my pet peeves! Yes, out there in the zeitgeist, there’s a belief that becoming successful and putting yourself out there are one and the same. There’s something cringeworthy about the ease with which the implication is made: Just put yourself out there and the followers will find you, the buyers will come, and all will be well.

But I’ve been freelancing for four years now. As appealing as that idea is, I can tell you it’s misleading. Not because it’s wrong, per se, but because It’s incomplete. Because here’s the thing about turning a profit and making an impact: You cannot do it on your own. “Putting yourself out there” is a one-sided act. It’s a transaction, with no relationship required.

We’re already facing too many false narratives out there about the lone wolves of business success. Over and over we’re told stories of the brilliant genius who came up with an idea, alone in his basement or garage, then burst onto the scene and changed the world with his wild, yet somehow perfectly timed idea.

Building Relationships Is Part of the Job

But every business owner I know–and I know a lot of them these days–builds relationships as part of their job. Talking with people is a critical function in their operation, both inside and outside of whatever venture they’ve built. Quite frankly, they do a hell a lot more than just “put themselves out there.” They’ve figured out how to not just talk, but to listen, then keep the conversation going, continually over time.

And so, I’d like to offer up a replacement phrase. If you want to build a career with more meaning, abandon that job that’s been treating you carelessly for years, and heed the calling that’s been nagging and refuses to stay quiet, don’t just put yourself out there. Start cultivating dialogue.

Putting Yourself Out There Versus Cultivating Dialogue

So, what does it mean to cultivate dialogue instead of put yourself out there? The difference comes down to one thing: working on your own versus working in community. Let me give you some examples.

When it comes to social media, it’s tempting to think that posting your idea or program is enough. But unless it’s followed up with more relational action, it can be similar to throwing a stone down a well. Yes, sharing your work is important, but doing it consistently builds a relationship.

TRUE CONFESSION: For me, posting consistently has been one of my greatest challenges, and I want to share this with you so we can all do better about relationship building.

Another thing that grates on my nerves about putting yourself out there as an end-all-be-all advice, is that it can make us feel that we need to stand alone, portraying ourselves as some sort of perfect being that has it all figured out.

Instead, when you think of it as starting a dialogue, does it help you relax a little bit? I hope so! When in dialogue, nobody has to stand alone. Nobody has to be a superstar or expert. Take it from one of my favorite books for business owners, Show Your Work by artist Austin Kleon.

“The minute you learn something, turn around and teach it to others,” he says, “Teaching people doesn’t subtract value from what you do, it actually adds to it.” So share your curiosities. Share your explorations. Even if they’re messy or new, often especially then, they have value to others. 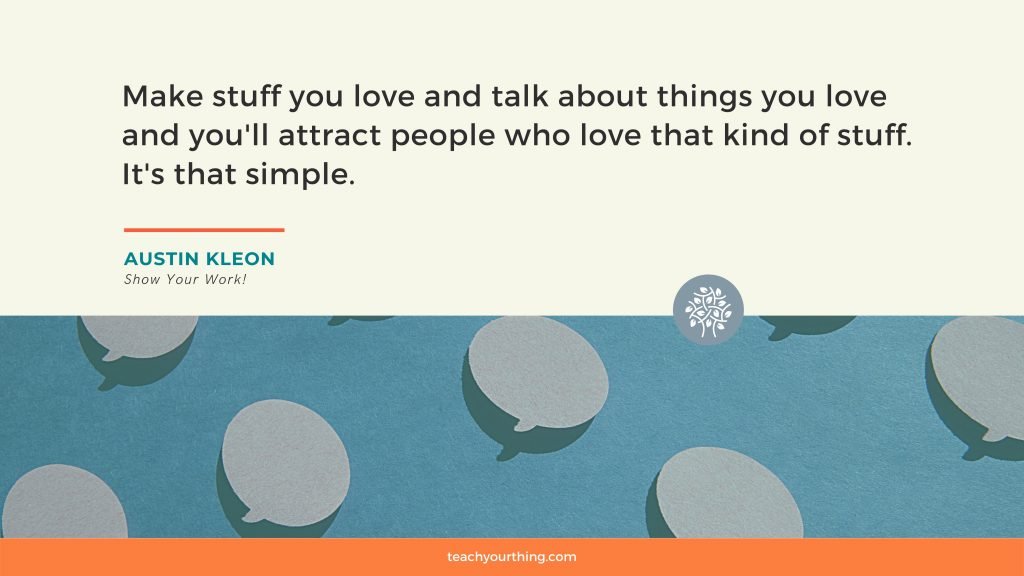 NOTE: All books I’ve linked to are from the affiliate shop I set up for Teach Your Thing on Bookshop.org. I like that they support independent bookstores!

I was a blogger before I was a business owner. Originally, I started a blog to share sewing projects I’d made–sigh, I’ve sinced abandoned the hobby in favor of other things. But as I discovered, the blog became a space to share my voice. Eventually, the sewing blog evolved into my second blog, called Resounding You, which explored ways to find and use your own voice.

It was through blogging that I discovered the power of cultivating dialogue. It didn’t gain traction, you see, until I shared it–not just passively, but actively. Over time, I developed a habit: After publishing each post, I’d go online and share it with a community who might care about the topic. Then, I’d read and respond to blog posts by three others in that community. Sure, this practice took time–on average I spent two or three hours on the followup–but I wasn’t just putting myself out there. I was participating in a conversation.

And you know what? Not only did that conversation make me feel better, energized by fascinating people doing things that inspired me, but it also led to followers. These followers weren’t just numbers to me. They were real people who also had something to say.

If you’ve taken the time to develop your first web site–kudos to you–this is a huge accomplishment! Now, how many people have you shared it with? Have you emailed your friends and family to let them know it’s there? Or try my blogging follow-up method and share it online.

Another cool thing you can do to cultivate dialogue is to host a launch party for your site. It doesn’t have to be fancy. Last year, a business owner acquaintance of mine hosted a virtual launch party for her web site. It was mostly a chance for her friends and family to share their thoughts about her journey.

But here’s the thing. The fact that I got to meet them, if only for an hour online, made an impression on me. I was honored to be included. That was more than six months ago, and I can tell you for sure: I’m more likely to recommend her services as a result of that interaction.

When it comes time to create your first offering, it’s absolutely imperative that you cultivate a dialogue. And unfortunately, it’s also a time when new business owners get scared. If this is you, I’m with you on this. It’s a big leap from knowing your work is meaningful to asking people to pay for it! Even writing about now makes me a little squirmy.

But we can and must learn to move beyond our fear of getting paid! As Rachel Rodgers says in her powerful book, We All Should be Millionaires, “There’s very little any of us can do–to get paid for the true value of our work, to make our own decisions, to control our lives, and much less to move more women, marginalized communities, and society forward–without the freedom that money can buy.” 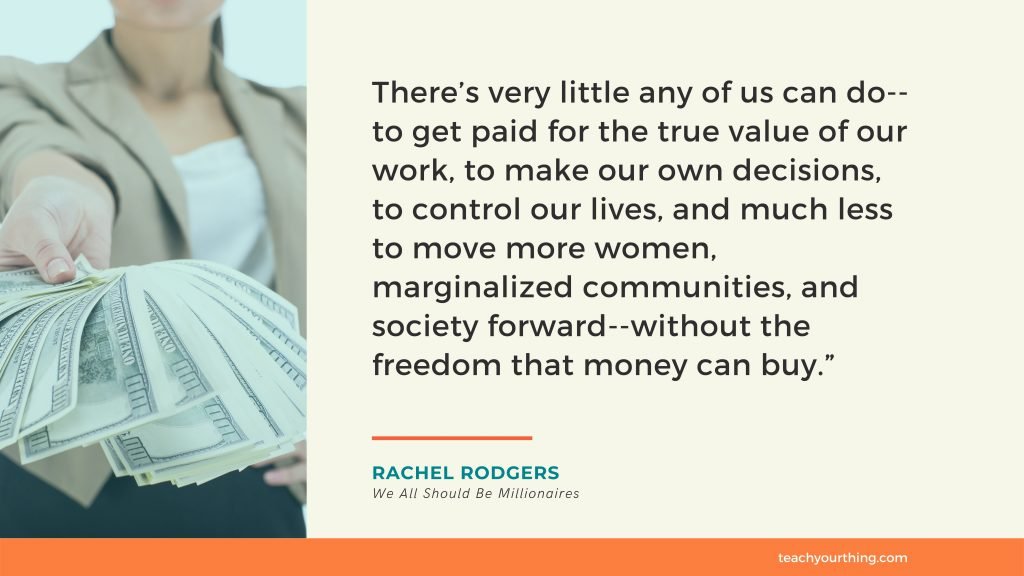 Indeed, I’ve come to realize that my biggest motivator is economic justice. This requires me to get over my own hesitations, to rewrite the stories that have played in my mind for decades about money. And it requires me to get paid, y’all! Of course, this goes for you, too.

And so I implore you: As you develop your next (or first) offering, don’t do it alone. Don’t sit by yourself for months creating and perfecting, tinkering with your idea, in the comfort of your home. Instead, invite a small group of pilot participants–a handful is enough–to co-create with you by providing feedback. Invite them in as soon as possible, so they can shape the design and scope and tone of what you’ll deliver.

Your pilot offering should still provide a way for them to get from Point A to Point B, so it’s okay to charge them for it. Sure, give them a discount, even a hefty one like half price, but do what you can to ensure they’re willing to pay. Pricing your offering at this stage will likely feel weird, but the best way to find the right price is to test the marketplace. Still not sure what price you should charge? If your pilot participants haven’t told you already, ask them! 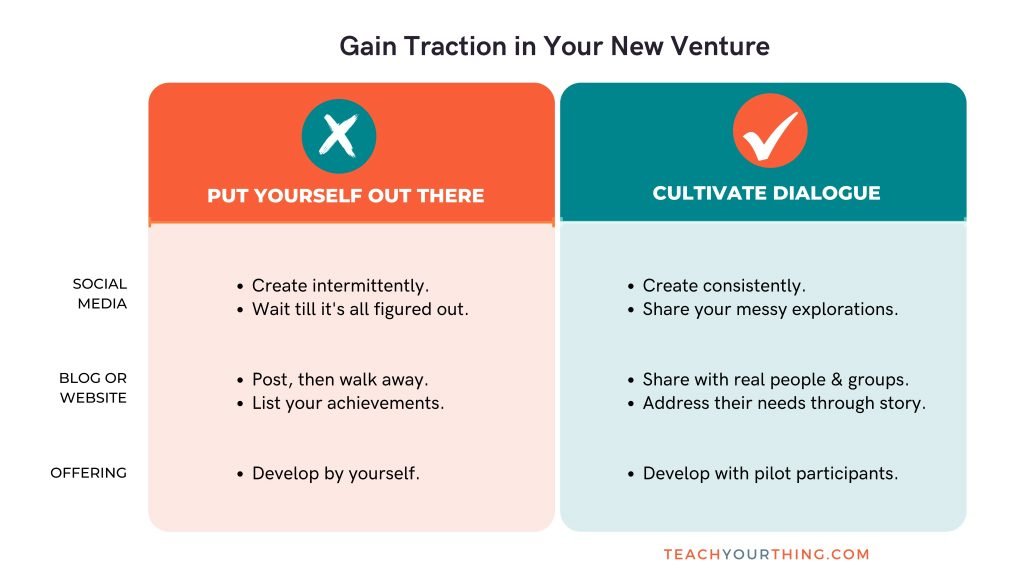 Wherever you are in your journey, I hope these tips help as you gain traction on your new side gig, business, or passion project.